“Zero Percentile is a Story Which has Never been Read Before” 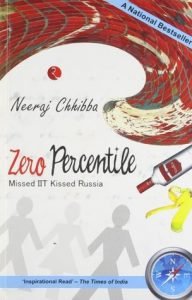 The beauty of literature is that it often enables our soul to live something that neither has our body experienced nor has our heart ever breathed before. Unfortunately, very little of what goes in the name of literature these days manages to do that. However, every once in a while, comes something that lifts us from our couches and transports us to an exotic or completely different life. A little bit in this manner:

My taxi arrived at the Shermetyeva Airport. It was not  really a taxi – Russia had developed a unique culture where you could  flag down any passing car and strike a deal at a mutually convenient  price to be dropped off at your destination. The system worked well in  those uncertain times when many car owners converted to drivers-for-hire  to supplement their income. I had even been fortunate enough to travel  in a huge Mercedes 600 once. The owner-turned-driver said he was an  opportunist and never missed the chance to make a quick buck.

Taken from Neeraj Chhibba”s Zero Percentile – Missed IIT Kissed Russia, the paragraph stands for all things interesting about the book. Adding to a fast burgeoning tribe of Indian writers in English, Neeraj comes up with a racy tale of the fascinating adventures of Pankaj, a less favoured son of destiny  across two completely different countries, India and Russia.

And it indeed appeals to both sides of us Indians, one that is rooted to the continuing traditions and the other that is ever so impatient to try out newer shores.

Here”s an interaction with the promising author:

NEERAJ CHHIBBA (NC): Zero Percentile is the story of a survivor who continuously finds solutions to his problems, braving destiny along the way. Though thoroughly deserving he always finds destiny looking the other way. The story takes you through the life of the protagonist from the time he is born and till the time he finishes his education in Russia. Life in Russia is harsh, the climate is not conducive, you have to study as well as fend for yourself. Add to that the unstable political climate in the 90s and you are ready for a roller coaster experience.

AR: How much did the book evolve from its genesis to the final draft? Was it, in any manner, owing to market considerations?

NC: When I began to write the book I was clear about Phase II and III of the book (which cover the life of the protagonist in Russia) and that I had to convey a couple of messages to the readers such as – not getting into IIT is not the end of the road, there is life beyond IIT and the best one can do is to piece his life together and move ahead as fast as he can, one should be very careful with his sex life; and break the myth that Russia is a bad place to live in. So, keeping these things in mind I began to write. It was difficult initially to put all the ideas together as a story and so I had to do a lot of rewriting. But in the end it came out well. I will be honest with you. The book was indeed written with the intent that the reader should like it and like it to such an extent that he recommends it to others too.

AR: Which are the principal points of appreciation and criticism that the book has earned thus far?

NC: It may seem funny but the same thing has earned me both appreciation and criticism. Some people have liked that I have written the book in simple words and it is fast-paced but others have criticized the book for the very same reasons. Apart from that the story has been appreciated for the freshness it has brought to college stories and I have been overwhelmed with responses even from 60 year olds who have said that they liked the book immensely and saw some part of their own lives reflected in the story.

AR: In your opinion, does the book conform to the present style of Indian writing in English or does it add another dimension to it?

NC: There is no such thing as present style of writing. There are writers who are identified with different genres of writing and they have co-existed for a long time. What has happened now is that a new breed of authors (who do not have a literary background) have come out and started writing stories on subjects close to their hearts. The younger generation has taken a liking to them instantly and have made them into successful authors. I would love to be liked by the younger generation, but at the same time, I would like my works to be appreciated by people across different age-groups, and regular and not-so-regular readers. I am happy that I can see this happening with ZP.

AR: Do you believe that writing in English, which seems to be the natural expression for new-age authors like you, helps in acquiring more attention in India these days?

NC: Yes, like with everything else in this fast-paced world, you are bound to get instant attention if you have written a good story. But then, you are forgotten instantly too if you are not repeatedly able to come up with good quality writing every time.

AR: Do you look forward to Zero Percentile getting turned into a movie? And, do you fancy writing stories/scripts for films?

NC: Yes, that will be the culmination of my dream. If you read ZP it has all the ingredients to become a super-duper successful Bollywood film such as friendship, innocence, betrayal, struggle, mafia and off course love.

AR: Finally, tell our readers in one statement, why they should be buying your book. Also, how and where they can buy the book?

NC: You should read ZP because it is a unique story, something which has never been read before – like life outside the IIT, story of an Indian student in Russia etc. You can buy it online at Flipkart or Infibeam and at all the leading stores in India such as Crossword, Odyssey, Reliance and Landmark.

About Neeraj Chhibba: Born and raised in New Delhi, Neeraj Chhibba considers the eternal memories of his school and college days to be the real inspiration behind hi maiden book. After doing his schooling in New Delhi, India, he went on to study engineering at Volgograd, Russia and is currently employed with a software company in Gurgaon, India.

Interestingly, (in his own words) his single biggest claim to literary honors as yet lies in a ‘Highly Commendable’ Certificate in Class X in an English Essay Competition organized by the Royal Commonwealth Society. He was the only one in New Delhi to have received it that year.

Though Neeraj believes that but for the pressure of earning bread he could have done more, the success of Zero Percentile has made sure that he is now ready to write more books.

< Previous Article
Film Review: Road Movie
Next Article >
Whose Secularism Is It Anyway?
Related posts that might interest you