Death Of A Pet 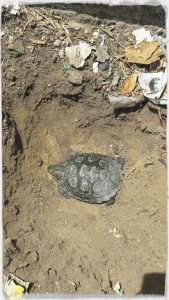 As with most mornings, I was reading the newspaper in bed while my pet turtle Tobi was in the water in his transparent plastic container by our bedroom window. This was his hour of basking in ‘passive sunlight’. But something felt different. I noticed that he was in an unusually calm floating state for a bit.

I tapped the container near his head: “Tobi, what’s the matter, buddy?“

He immediately responded by opening his mouth in a threatening manner – it looked an image straight from the Jurassic Park. Now, he was always the feisty one, but this one was a first. “Rascal,” I cursed him lovingly and went on to my business.

A few minutes later, when I returned to the room, he was in almost the same state. I knew something was wrong. I picked him out of the water to have a close look. Nothing. I put him on a flat surface – and for the first time, his neck mimicked his body and rested – limp – on the surface. Normally, he would have pulled back his neck into his shell when being put on the floor.

It was time to rush to his doctor.

It happened all so quickly that it is not difficult to see his arrival as an event of yesterday.

My daughter has long been persistent about having pets at home. So it was only a matter of time before we brought ‘something’ home. Fortunately, though, we managed to pull her ambitions significantly back from dinosaurs (well, not quite), to make her agree to the smallest and, what we imagined to be, the most manageable pet – a 40-gram, two-month-old red-eared slider turtle (terrapin) that could live in a small glass flask.

We might as well have gone for fish, but turtle seemed more exotic. Such was the discerning passion!

But once we bought him home, it was love at the first movement – what with the little brat being a feisty mover both in water and across the floor. We named him Tobi Rawat.

Soon, our individual and collective days began with “Good Morning Tobi“ and culminated in “Good Night Tobi“. We would talk with him incessantly. We really believed that he understood it all, and responded precisely with his movements and – hell – even facial expressions.

None of us would feel alone at home as long as Tobi was there, well, somewhere in the house.

He was an absolute box office too. His method of basking in afternoon sun was the stuff of legends. He would rest his body on his bottom shell (‘Plastron’), stretch out all his four limbs in the air, pull out his neck to the maximum and then, almost with disdain towards us lesser mortals, turn the neck on one side. He would then stay like that for many minutes, oozing copious amount of well-earned arrogance. Such swagger!

And then, that morning, he rested still, floating in the water.

It was time to rush to his doctor.

Dr Mugdha Rakshit, founder of the Happy Pets Clinic and alumni of the Royal Veterinary College, University of London, was quick to sense it after taking Tobi in her expert hands.

“What happened,” she asked me, without caring much for a reply. “He’s no longer there“.

I was shocked beyond my wits.

Almost at that instant, as the doctor worked her seasoned fingers and palms on the little one, Tobi moved ever so slightly and then opened his mouth.

Yes, just the way he did that at home when I had tapped his container.

“He’s gasping. Not entirely with a lot of life left within,” explained the doctor.

It became difficult for me to forgive myself when she said that Tobi probably had left us 30-45 minutes ago.

Did I leave him to die in the water – when he perhaps was gasping for life? There is no way I could’ve guessed. He was a water species. He was in the water.

“Maybe there was an insect bite or something and there was a hypersensitive reaction to it, causing perhaps a paralysis that caused him to drown in water.”

Perhaps. No tests were carried out to ascertain the absolute cause.

I sunk to an unknown low for a couple of days.

The doctor has since suggested that we go for another one.

I’m not so sure about that one.

For starters, I’m not at a place currently in life – emotionally – where I can withstand more such losses.

That apart, I’ve never been a ‘pets type of a person’. I can’t say with any sort of conviction if that is because of any philosophical reservations that I might be having at the sub-conscious level.

For instance, writing in the Journal of Philosophy, Jessica Du Toit of the Department of Bioethics, National Institutes of Health, USA, asks the question, “Is having pets morally permissible?“

It reads in line with many other similar voices. Presenting ‘The Case Against Pets’, Rutgers (USA) law professors Gary L Francione and Anna E Charlton argue that “domestication and pet ownership violate the fundamental rights of animals.”

In her line of reasoning, Du Toit says:

The argument – or the premise, if you will – becomes quite pertinent in the light of the fact that our doctor kept on reminding us, “management is the key”. ‘Right amount of sunlight’, ‘freedom to choose between water and basking on rough stones’ etc formed the key to ‘management’.

Who can ever tell? And that might be the whole point of Du Toit and her community.

Tobi was with us for barely 11 months. At the risk of embarrassing myself, I just don’t quite feel the same after him. He weighed 60 grammes, just about filled my palm, and – from what I am told – he, as a species, couldn’t have been too keen on human interaction either.

So what explains this sinking feeling?

Did he, with his presence, help me plug a hole within, somewhere?

Tobi, buddy, I miss you. You were my first.

< Previous Article
Chelsea And Conte Need To Transfer Faith, NOW
Next Article >
Chelsea Remains The Team To Beat
Related posts that might interest you

Chelsea Remains The Team To Beat