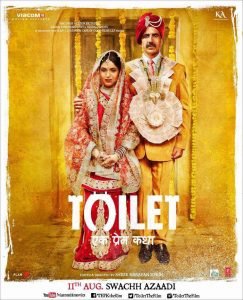 Akshay Kumar is fast emerging as a very unlikely bearer of varied and content-driven Hindi cinema. Derided by the reigning Hindi cinema establishment and its audience bank as ‘Bharat Kumar 2.0’ for his off-screen nationalistic messages and works, the prolific actor’s latest film – despite its shortcomings – could end up as a case study on development communication, or Communication for Development (C4D), in the Indian context.

Keshav (Akshay Kumar) and Jaya (Bhumi Pednekar) are natives of two adjoining rural neighbourhoods of Mathura district in Uttar Pradesh. After a brief period of wooing and cajoling by Keshav, Jaya gives in and the two get married.

But the marriage begins on a disastrous note when Jaya finds out that there is no toilet in the Keshav household – and, after many unsuccessful attempts to fit in, walks away from him.

Left with no other option, Keshav sets out to make things right – and, in the process, takes on the well-entrenched mindsets, social barriers, and the administrative mechanisms of our country.

Acknowledged in the end credits of the film, avid news readers are able to recollect that the genesis of the film lies in the real life story of a young girl Anita Bai Narre from Betul, Madhya Pradesh.

But there have been a few other similar instances too. For example, Kanpur girl Neha Shrivastav had walked away from marriage just four days prior to the date for the same reason. Neha told the media at the time that she had taken the step after getting inspired by a Vidya Balan advertisement about toilets at home.

The two examples are significant. The former has given birth to a C4D driven movie while the latter took inspiration from a C4D message to give birth to a social reaction (from an individual, to begin with).

Put together, the examples illustrate the symbiotic relationship between C4D and society. On the one hand, C4D is about understanding and giving a voice to the needs of the society, but on the other, it is also about drawing out a response from the society by means of that voice.

TEPK is a good example of being an agent of both ends of the cycle.

If a thoroughly utilitarian social communication featuring film star Vidya Balan – in an old DAVP packaging – could inspire a young woman in a conservative society like Kanpur to call off a monumental social milestone like marriage, then the ripple effects of the latest Akshay Kumar film can potentially be immense – especially in those sections of the society that are exposed to and influenced by Hindi cinema.

For, mind you, unlike, say the Vidya Balan communication, a film like TEPK intrinsically possess many elements that stay in the heads and minds of those exposed to it. For instance, Hans Mat Pagli song, a rare old-world melodious composition in the voice of Sonu Nigam, is a runaway hit. How can the person crooning the song not remember, every once in a while, the subject of the film?

Then there is the hilarious episode of the leading man getting married to a buffalo (not a spoiler, it was revealed in the film’s first trailer itself) to fight off the ‘Manglik Dosh’. The episode is played indirectly throughout the film – making it just as memorable as the basic premise of the film. Sometimes, it is imperative to illustrate how archaic some of the beliefs ‘look to the naked eye’ to force the believers to rethink them.

Again, which film had this scene? Ah, the film about building toilets at home, especially for the women of the family.

Then there is that rather strong view by the head of the family on the “impossibility of the Sacred Tulsi (Holy Basil) plant sharing the courtyard with a toilet”. It forms one of the milestone episodes of the film.

And we are not even talking about the very obvious subjects of not just humiliation but security hazards for women who are forced to answer nature’s call in the open. TEPK actually begins by highlighting (via the headlights of a tractor, if you will) the issue.

In other words, TEPK weaves together many such social issues into the singular premise of the film viz., building a toilet at home. And thereby talks about it in a complete socio-cultural context (of a sizeable section of the vast Indian society).

Using the story of the lead pair, their immediate families, and their surroundings, TEPK seems to stay true to the various United Nations (UN) organisations’ approach towards C4D via the following four interlinked goals:

As per the United Nations Development Group (UNDG),

“the greatest challenge the communicator faces is the preparation and distribution of development messages to millions of people in such a way that they are received and understood, accepted and applied. If they accept this challenge they will be able to get the people to identify themselves as part of a society and a nation. This identity will help in harnessing these human resources for the total welfare of the individual and community at large“.

This is where TEPK scores. It has made sure that the message is indeed received, understood and accepted by millions. It manages to do so by using an enchanting mix of humour, romance and the quintessentially Indian high pitch drama at places.

There is absolutely no doubt about the acceptance of the film by rural folks. But will they ‘apply’ the C4D message?

Well, “Mera Desh Badal Raha Hai“. And I am optimistic that the film would have a ripple effect – of whatever magnitude – in some geographies of the so-called Hindi belt. That is why I believe the film might end up becoming a case study on development communication in the decades to come.

All theories aside, however, TEPK is an enjoyable family watch. The author took his 67-year-old mother along and she loved it. “More such films should be made,” she said.

Not without its flaws, go watch the film for absolutely smashing performances by Akshay Kumar, Bhumi Pednekar and Divyendu Sharma. The direction is very good at most places. The editing, adroit at most places, could have been tighter in the second half.

Warning: You might end up humming ‘Hans Mat Pagli’ for the remainder of the day after watching the film.

3 stars for the cinema; 5 for being an agent of change.

An Elementary Primer for Your Crisis Communication Efforts

How Good are You at Communicating Change?

Public Health Communication has to be ‘Mainstream’

2 Comments on this article. Feel free to join this conversation.